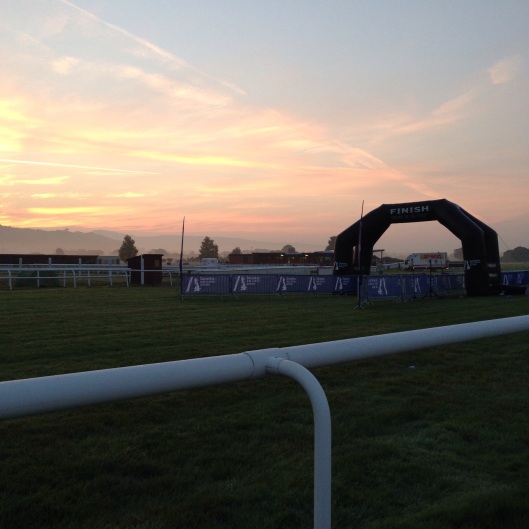 Another night without 3G spared me from writing something in Ludlow last night as I was pretty tired to be honest, although I had hoped to post a few pictures of the wonderful scenery on route, particularly through the Wye Valley.

Day 3 was another hilly day, and a last minute diversion (literally an hour before we arrived on scene) up an thigh bursting 18% climb meant it turned out harder than anyone expected (or feared!). The weather was kind again, with blue skies from the off at a chilly Bath but an immediate climb warmed us up and we passed over the Severn crossing to briefly enter Welsh Wales, before safely crossing back in Gloucestershire. There were plenty of photo ops as we headed north up the Wye Valley, and a convivial caffeine stop was deemed necessary at picturesque Ross-on-Wye.

The hills flattened out after that as we headed into the Herefordshire countryside and in to Shropshire (I think county 7 of 23!), and it was great to see Dad at the side of the road encouraging us on. He also came along to the finish at Ludlow Racecourse and we enjoyed a recovery Flake 99 in the warm afternoon sunshine. Another 97 miles down, in just over 6 1/2 hours riding, but the 20,000+ feet climbing in just 3 days is starting to take it’s toll on my knees.

Another cold start out of Ludlow saw us join up with Tim from our local bike shop and two Guernsey honeymooners (really!) who struggled yesterday as we tried to raise their spirits by playing the worst ever game of ‘Guess Who?) for a full 30 miles. We made our excuses at the first pit stop and pushed on with a couple of other groups as the terrain flattened out as we crossed into Cheshire. All good news for the knees, but my Achilles heal has started to get quite painful and was pretty swollen by the time we crossed the line in Haydock Park 107 miles and 6 3/4 hours later.

A quick visit to the physio for some magic tape should hopefully see me right for tomorrow’s climb up Shap Fell, but to have reached ‘the North’ is certainly a welcome physiological boost.